Posted on August 10, 2016 by thefullerreport

During a summer trip to Tennessee with the family we drove Interstate 81 down Virginia’s Shenandoah Valley. Along the way we passed the sign which states: “Extent of the Chesapeake Bay Watershed”. I pointed out to the kids that we were passing the point at which all the rain falling behind us (as we drive Westward) should ultimately flow into the Chesapeake Bay and out into the Atlantic, whereas all rain falling ahead of us should flow into the Ohio river system and from there through the Mississippi River to the Gulf.

So, a few weeks later when Jill and I were in Colorado and staying near the little town of Divide my thoughts turned to the Continental Divide of the great Rocky Mountains, the back bone, if you like, of the North American continent. Divide itself is not technically the watershed; that comes a few miles further west at Hoosier Pass, however for the most part, all the precipitation east of Divide will flow either into the Gulf or through the Great Lakes to the Atlantic, while everything falling to the West will flow into the Pacific. There could not be a starker difference between the directions which gravity forces one drop of water to take! 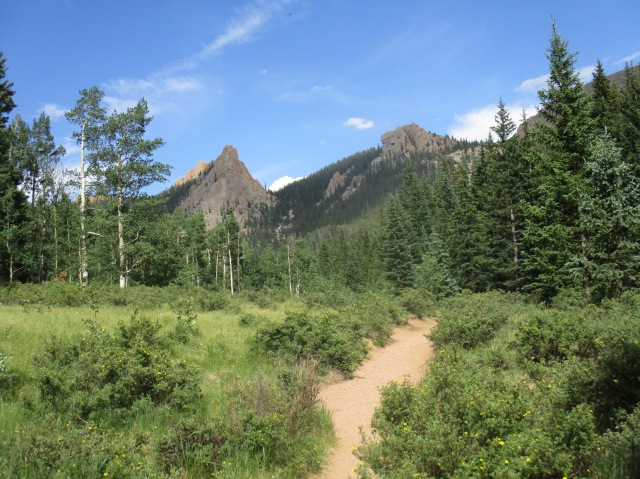 We were on retreat. We were taking time away from work, family and everyday Virginia life, for rest, reflection and prayer. We felt very blessed as we explored, hiked, enjoyed good food and shared fellowship with the three other couples staying at the retreat center. We were also in a land of profound differences. Our retreat was hosted in a lodge hidden away in a quiet forest of ponderosa pine and aspen while down the highway just a few thousand feet below us were the tourist hubs of Woodland Park and Manitou Springs. We enjoyed beautiful clear days with warm summer temperatures, aware that winter brings blizzards and weeks of frozen landscape. When we went to the top of the 14,000 foot (4,200 meter) Pike’s Peak we experienced the immediate transition from lush green forest to barren landscape when we emerged above the tree line. And from the top we witnessed the contrast between a clear blue sun-washed distance, and angry dark thunderheads pouring rain within the atmosphere, while little flecks of snow drifted over us.

Many of our friends and colleagues around the world are affected by strife within their nations. Even as the Olympics bring the world together in Rio, our Brazilian friends live with the impact of the impeachment process of their president. Venezuelans live with a bankrupt economy, while the French grieve over senseless violence, and our friends in Turkey are unsettled both by war to the south and the aftermath of an attempted coup. Britain’s European Union exit vote affects the whole continent and here in the USA many are pondering how an election primary process could have produced two equally unacceptable candidates for Presidential office. The divide within many communities is apparent. Surely in darker times, there is an opportunity for the church to renew Jesus’ offer to the world of the light of the gospel.

The writer to the Hebrews tells us that: The word of God is alive and active. Sharper than any double-edged sword, it penetrates even to dividing soul and spirit, joints and marrow; it judges the thoughts and attitudes of the heart. (Hebrews 4:12) These words remind us of the offence of the Gospel. There is a God in heaven who is audacious enough to tell us how we are to live. No, he is not audacious, he simply IS! The I AM is the creator God. The right to tell His creation how it is to behave requires no audacity. But regrettably, we are living in a society that always wants to blur the lines; a world that does not want to admit the stark divide between the Kingdom of Light and the kingdom of darkness. Regrettably we find this not only in societies where we would expect it but also within churches that profess the truth but live a lie. Sin has become an issue for pastoral accommodation rather than pastoral care; issues of social and religious injustice are excused; and Jesus’ Great Commission to preach the gospel to every nation often remains ignored.

Divide in Colorado denotes a place from which gravity determines which way the rivers flow. However gravity does not determine the choices of the follower of Christ. His choice does not have to be subject to the prevailing social winds. The divide for him must be grounded in the unchanging and eternal word of God.

This entry was posted in Family News, Teaching and Meditations and tagged Family, Missions. Bookmark the permalink.